I am filled with conflicting emotions and warm oatmeal at the moment. Did you know that oatmeal has only trace amounts of wheat in it, so that people who shouldn't eat gluten can still eat oatmeal? I was so grateful. This whole "no gluten" thing has been quite the wrench in my daily eating habits. But it's definitely the right thing for me- since I've cut it out I feel better, less lethargic, and less achy. Worth the sacrifice. Even if sometimes the only thing I want to eat is a biscuit with honey.

And now that my breakfast food tangent is over and my oatmeal is slowly digesting I can focus on all those conflicting feelings I mentioned earlier. My book, The Darkest Lie, came out on Kindle this past week and on the one hand it's doing really well. There's lots of good buzz about it and even a review on a reputable and popular blog site. (I mentioned it last time with the link). My sales for a self-published Kindle book are better than average. I have great friends and two giveaways for author signed copies of my book on other blogs:

both of which are awesome blogs run by great people. They're mommy blogs; Because I Don't Scrapbook is funny and engaging talking about the trials and enjoyments of being a stay at home mom, and My Name is Snickerdoodle is endearing and artistic and is geared more towards homemaking, crafting, and fantastic recipes. The author of that blog, Amy, actually won a Paula Dean cooking contest and creates her own recipes. Try any of them. They're amazing.

Apparently I'm hesitant to talk about my feelings, because I keep finding other things to go on tangents about. Okay, here's my concern: my reliable source of income cuts off next month. That's preschool, and I'm going to miss my kids. I am excited at having that time during the day to write. However, I don't get any royalties from my book sales until 60 days after the end of the month of the sale. So for every copy I sell in November, I won't get any royalties until February. And that concerns me, because there's that month in the middle where we still need food and bill paying and stuff.

Not that my husband doesn't have a great job, he does. If it weren't for all my medical bills and past medical debt we'd be good to go with no worries. All our debt is medically related, and it's all me. So I feel responsible for it. And no, it isn't all recent with the testing and neurology issues- about six months after my second son was born I slipped in some water and bashed my knee on a metal bar. It destroyed all my cartilage and I had two surgeries and a year of physical therapy. I had to use a walker with a basket wired to it to get around our condo and take care of my toddler and my baby while my husband was trying to finish grad school. So I am stressed about money, but trying to have faith that this is the right thing.

And then there's all the reviews my book is getting. Now I like my book. I think it's great and everyone should read it. But at the same time, it's my book. I don't expect other people to think it's anything out of the ordinary or special. How can I be so arrogant as to assume that self publishing was a great idea? Why should I think my book is so special that it could beat the horrible odds stacked against it? There shouldn't be anything so special about it or about me that would mean I could be one of the 3 successes for every 500,000 self published failures (those numbers are sadly not exaggerated).

This kind of stream-of-consciousness is pretty normal for me, so when I get reviews like these, I don't know what to do.

"I knew the author growing up and thought I would buy the book to support her. I was Shockingly surprised at how good it was. I had no idea she was that talented a writer. It caught my attention and held it. I had a hard time putting it down, and then couldn't wait to pick it up again. I recommend this book to anyone, young or old"


"I was lucky enough to be one of the first readers of "The Darkest Lie", a young adult fantasy novel that kept me on the edge of my seat, kept me coming back for more, and made me laugh and cry.

The book is well written, and my most favorite part is the way the author, Angela Day, describes magic. I have read probably more than my fair share of fantasy literature, and loop holes in magic, and unidentified or unclear magic sources are a big pet peeve of mine. This one is, put simply, BEAUTIFUL. And logical.

The characters are lovable, or despicable, which is fitting, and more importantly, they're relateable. Every kid alive has felt the way Thane feels at one point or another. And everyone wants the confidence that Remi has, or knows someone who has it.

This book is a MUST READ for the Teen target audience as well as their parents."

"If you like Urban Fantasy, or YA sci-fi or fantasy in general (as I know many of you and your offspring do, reading friends!) Give it a try! It has adventure, magic, complexity, humor, psychological depth-highly recommend."

Awesome, right? And then I'm getting feedback like this from people I don't even know, which is important because as much as I enjoy compliments from my friends and family I'm never sure how much of it is because of whatever it is I did and how much is because they love me. I know they're being sincere, that isn't the question- I just also know that they can't be objective. Which is fine, no one can be truly objective since we each see the world through our own belief windows. It's just a really good feeling when someone says something positive about my book (although being "Shockingly surprised at how good it was" didn't quite feel like a compliment).

Therein lies the awkward. I suck at taking compliments. I'm terrible at it. I don't know what to say or how to respond, because part of me feels like I don't deserve it and another part is flattered and pleased and another part of me wants to say something nice back and then I think I should be humble and deflect and by this point I realize I haven't responded to them and now it's just awkward because someone said something nice to me and I've been standing there stuck inside my head for way too long. Yep. I suck at compliments.

At taking them, anyway. I'm great at giving them. One of the biggest reasons that I'm any good at writing is because I've likely read over 2000 books in my lifetime. That's a lot of words and phrases to cram into one head. So when I find myself appreciating something about someone else, I have a lot of words to draw from and am able to be specific and articulate with praise. Never flattery or empty compliments- no wasting words like that. There is always something nice and true to say about someone else.

So what do I do now? I worry. I stew. I write. And I obsessively check my kindle sales to see if people are buying my book. It's only going to get worse after Wednesday when the print copy comes out- if I can sell 2000 copies (two thousand?!?!?) then I stand a chance at getting picked up by a publishing house. Anything less than that, and they're not interested. And I don't have the same time table that everyone else does-- this isn't a hobby for me, it's a passion. Most books sell slowly, generating buzz over the course of years, rolling like a snowball on an inclined plane just past the angle of friction. (aka REALLY SLOWLY). But I'm already a month behind.

Remember that post about a leap of faith? Well, I can see the cliff. It's straight ahead. I can't see anything beyond it.

And I'm running towards it, hoping to fly. 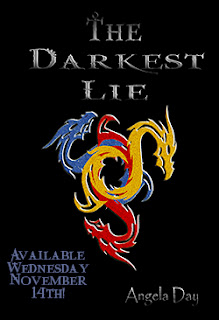